This article initially appeared on the U.S.-Saudi Business Council's website on April 5, 2021.

The U.S.-Saudi Business Council spoke to Sempra Energy’s Chairman and CEO, Jeffrey Martin, about Sempra’s liquefied natural gas expansion, the role of natural gas in mitigating climate change, the company’s potential partnerships in the U.S. and Saudi Arabia, and their vision for developing sustainable energy infrastructure such as smart meter and smart grid technologies. 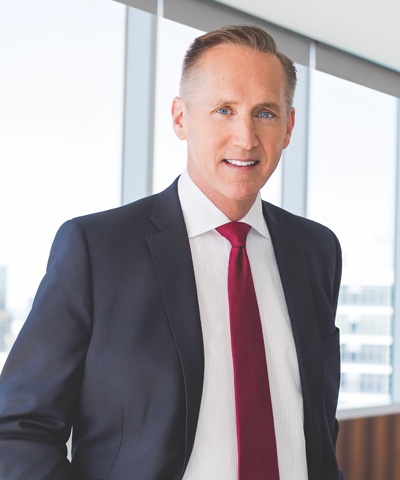 Sempra Energy is one of the largest energy infrastructure companies in the world, with plans to become one of the largest exporters of liquefied natural gas (LNG) in North America. What role will Sempra play in leading the global energy transition over the next 20 years?

At Sempra Energy, we have committed to making infrastructure investments that support the world’s transition to a carbon neutral energy system.

Climate change is a global challenge. Between now and 2040, energy-related emissions are forecasted to decline in OECD nations, while growing significantly in developing countries. We believe that displacing coal and scaling up renewables are the most cost-effective “quick climate wins” for the developing world — solutions that allow those nations to reduce energy poverty, build more sustainable communities and improve the lives of their citizens.

The widespread adoption of renewables hinges on investment in critical new infrastructure and storage capacity on a massive scale. We need to build and modernize grids with the same urgency as we develop renewables. Already, markets like California and Texas, where Sempra Energy is the largest owner of energy grids, successfully produce 40% of America’s renewable energy, supported with reliable energy storage and natural gas. This underscores our ability to maximize renewables, while simultaneously investing in grid reliability with advanced battery storage and natural gas as a low-carbon partner.

Over the last two decades, the U.S. has reduced its energy-related emissions more than any other country in the world. According to the International Energy Agency, [1] this success is credited to the widespread adoption of renewables and fuel-switching from coal to natural gas in power production.

By exporting liquefied natural gas (LNG) with trade partners like Saudi Aramco and others, the U.S. can help replicate this success in countries still heavily dependent on coal for power generation. Sempra has an LNG export facility in operation on the U.S. Gulf Coast and projects under development on both the Gulf and Pacific Coasts of North America, making us well positioned to help our customers accelerate the global shift to sustainable energy systems.

This diversification of America’s energy resources is not unlike Saudi Arabia’s own experience. Saudi leaders have historically done a remarkable job of maximizing their own indigenous resources. For example, in the 1970s, the Kingdom established the Master Gas System, grew its petrochemical industry, and developed new industrial cities on the Persian Gulf and the Red Sea. Today, new opportunities are emerging in both the Kingdom and the U.S. to develop infrastructure that supports renewables and natural gas for domestic power production, while enabling new fuel development like hydrogen and ammonia.

You had previously reached a Heads of Agreement with Saudi Aramco for the purchase of 5 million tonnes per annum of liquefied natural gas (LNG) and a 25% equity investment in the proposed Port Arthur LNG project in Texas. What affect could this deal potentially have on global decarbonization?

This is where I think the analogy of the Master Gas System and the development of the cities of Jubail and Yanbu in the 1970s applies. People forget how ambitious those projects were. One of my favorite statistics is that the volume of water processed at Jubail’s pumping stations and canals exceeds the combined flows of water at the mouths of the Tigris and Euphrates Rivers.[2]

Similarly, I believe Port Arthur LNG has the potential to be a truly unique project for the United States and holds great promise for our continued alignment with Saudi Aramco. The proposed project is positioned to be one of the world’s largest LNG projects spanning 3,000 acres of land and 3 miles of waterfront access. In the fight against climate change, this project would advance our ability to safely deliver low-cost natural gas to developing economies where the IEA projects incremental electricity demand is poised grow by 90% over the next two decades. That is why we believe LNG can be a key component in reducing global greenhouse gas emissions and helping to raise nearly 3 billion people in the developing world out of energy poverty.

The proposed Port Arthur LNG project is also exciting because of its ability to advance a series of next-generation energy technologies that are important to the U.S. and Saudi Arabia. These include large-scale carbon sequestration, clean hydrogen and increasingly greener forms of LNG. We think the next decade is critical and that collaboration with world-class companies like Saudi Aramco is critically important. Sempra’s goal is not just to build a world-class facility that America can be proud of, but one which Saudi Aramco can also hold up as a shining example globally as they advance their own energy transition and diversification strategies.

Saudi Arabia has recently announced several initiatives to develop carbon-neutral cities, such as The Line, and has stated its commitment towards becoming a global leader in sustainable energy. What role can Sempra play towards the achievement of this vision?

Sempra is based in California where we own two leading utility companies that have been on the forefront of decarbonization, diversification and digitalization for decades. We routinely collaborate with public, private and academic organizations to promote clean technologies, reduce greenhouse gas emissions and drive economic growth. In Los Angeles, we see great potential for our utility, the Southern California Gas Company (SoCalGas), to play a leading role in decarbonizing the industrial sector through investment in lower carbon fuels like renewable natural gas and hydrogen.

Global collaboration and knowledge-sharing is essential to solving the challenges posed by climate change. The Executive Director of the IEA, Fatih Birol, has often been quoted as saying that up to 50% of the new technologies needed to deliver a carbon-free system by 2050 do not exist today.[3] At Sempra, we see that challenge as an opportunity. Reimagining energy and fostering sustainability have been long-running commitments at our company. We are committed to a corporate culture where we can share new ideas and collaborate on innovations. At the end of the day, we are all in this together and working in concert with Saudi Aramco, SABIC and other like-minded companies is how we will really move the needle in promoting innovation to mitigate climate change.

Saudi Arabia is moving into smart-grid, smart meter and smart electrification. As a global player, what are Sempra’s proudest accomplishments within this field?

Climates around the world are changing. In the western part of the U.S., the risk of wildfires is increasing. That is why at San Diego Gas & Electric (SDG&E) we are investing heavily in innovation to create new smart-grid technology to reduce fire risk. With one of the largest utility-owned weather monitoring networks in the world, SDG&E leverages artificial intelligence to help predict which circuits are most prone to fires due to adverse weather conditions. We are also making great progress on new technologies that can detect a falling power line and deactivate power before the line hits the ground in order to reduce the chances of a wildfire. Anytime we can improve the safety and reliability of our energy grids, it is a big win for our customers.

What role do you see hydrogen technology playing as the Kingdom moves to more sustainable living?

The importance of natural gas systems only increases with investments in hydrogen. Today, using natural gas in power generation helps advance renewable adoption, reduce emissions and create more resilient communities. Over time, we expect that hydrogen will play a similar role in accelerating the transition to a carbon-neutral energy system. That is why we as company are already investing in more than 10 hydrogen research and demonstration projects here in California.

I would also note that Bloomberg New Energy Finance estimates that hydrogen could supply nearly a quarter of the world’s energy demand by 2050, while cutting CO2 levels by nearly 35%. There is no question that there is enormous potential for both the United States and the Kingdom of Saudi Arabia, as two of the world’s most important energy powers, to play leading roles in developing and advancing different hydrogen applications.

Using one historical example, between 1984 and 1996, Saudi leaders re-envisioned their power markets and ability to produce potable water. In roughly a decade, electricity generation in the Kingdom increased by a factor of 25, while the production of desalinated water rose from 4 million to 355 million gallons per day.[4] As we turn our attention to the great challenges associated with climate change, it will take that same kind of ambition and leadership for the U.S. and Saudi Arabia to bring forth bold solutions like LNG, hydrogen, ammonia and large-scale carbon sequestration.