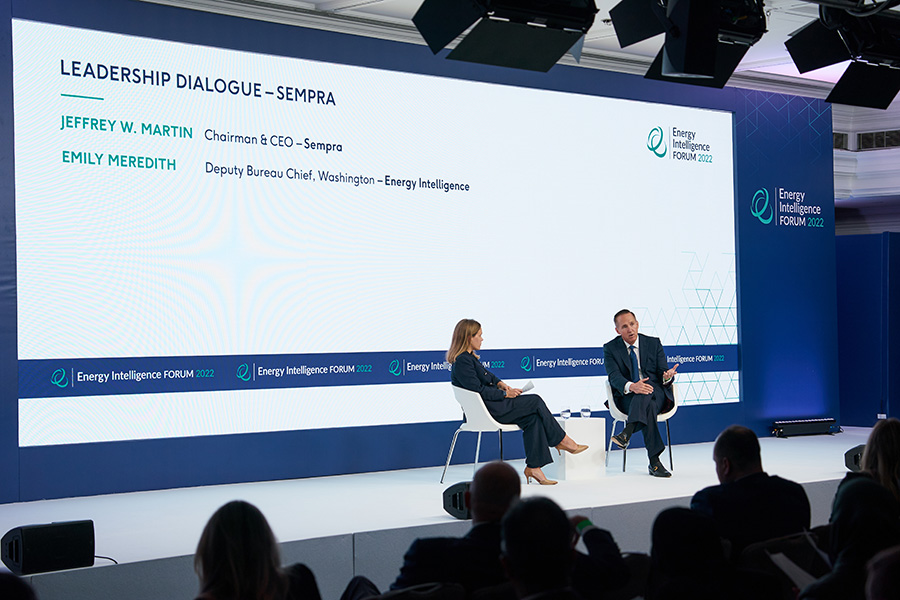 With a series of different challenges unfolding in Europe, including the ongoing war in Ukraine, global energy leaders gathered in London for the Energy Intelligence Forum. Topics of discussion ranged from updates on market dynamics to supply concerns and the need for critical new investments to establish a cleaner and more secure global energy system. Also at the conference, a keynote leadership dialogue was held with Jeffrey Martin, chairman and chief executive officer of Sempra, who outlined the growing role of American liquefied natural gas (LNG) in helping to meet the energy security needs of trading partners in Europe and Asia.

Martin expressed optimism that the U.S. could out-compete global peers in offering lower-emission LNG exports in the coming decades. Current LNG operators, including Sempra Infrastructure, are already pursuing cleaner technologies such as electric drives, carbon capture and hydrogen. Martin also noted that the recently enacted Inflation Reduction Act provides further incentives for these investments while advancing the broader policy goal of reducing U.S. emissions by 40% by 2030 compared to 2005.

“We think hydrogen certainly will have a big role to play as the LNG space evolves,” he said. “As we build new export facilities, we are planning ahead with a view toward leveraging common areas in development to allow us to more cost-effectively bring hydrogen into the mix further down the line.”

Additionally, Sempra is a founding partner of a methane emissions measurement and tracking initiative called Veritas to certificate emissions. Working with upstream producers to certify feed gas and cargoes as low-emission creates another opportunity for the U.S. to further demonstrate its position as a sustainability leader to countries importing U.S. LNG.

“Innovation and developing new technologies should be framed as a leadership opportunity,” said Martin. “Between now and 2030, and in the decades that follow, we expect America to compete aggressively to deliver a lower emissions profile across the LNG value chain compared to other international alternatives.”

Sempra is the owner of one of the largest energy networks in North America, with roughly 300,000 miles of transmission and distribution assets. Although Sempra’s operating companies do not produce energy in any significant way, the company’s networks deliver energy to more American consumers than any other utility. “In many ways, that is why we have such a relentless focus on continuing to decarbonize the energy we deliver,” Martin shared.

California, which is the 5th largest economy in the world, is a prime example of how certain regions are already making significant progress toward a decarbonized future. San Diego Gas & Electric Company, owned by Sempra, is a recognized leader in providing energy from renewable sources. Also, by 2030, California is expected to be well on its way to phasing out the sale of new gasoline-powered cars, which would advance the electrification of the transportation sector with the associated build out of charging infrastructure and vehicle-to-grid power systems.

“At Sempra, we are going to try to electrify as many aspects of the communities we serve as we can, but we also recognize there will be some areas that are hard to electrify, like heavy-duty transportation, as well as certain commercial and industrial processes,” said Martin.

This gap could be served through clean molecules such as green hydrogen. Martin shared with the audience that Sempra’s subsidiary, Southern California Gas Company, has developed plans to establish a major hydrogen hub to serve the greater Los Angeles region. Today, Los Angeles is home to the nation’s largest manufacturing base and two of the busiest container ports in America. Serving manufacturing and heavy-duty trucking needs through cleaner fuel sources is increasingly recognized as a critical success factor in delivering a low carbon future.

Building energy networks for the future

By 2030, Martin expects exports of American LNG will more than double with the principal benefit of reducing the market’s reliance on coal for power production. Combined with an aggressive expansion of renewable power and electric battery storage, the global energy mix has the potential to be reformed significantly by the end of the decade.

“It’s exciting to see the United States has made a decision to take an affirmative leadership role in transitioning to a lower carbon and more sustainable society,” said Martin. “At Sempra, we are committed to doing our part.”

In this article, forward-looking statements can be identified by words such as “believes,” “expects,” “intends,” “anticipates,” “contemplates,” “plans,” “estimates,” “projects,” “forecasts,” “should,” “could,” “would,” “will,” “confident,” “may,” “can,” “potential,” “possible,” “proposed,” “in process,” “construct,” “develop,” “opportunity,” “target,” “outlook,” “maintain,” “continue,” “progress,” “advance,” “goal,” “aim,” “commit,” or similar expressions, or when we discuss our guidance, priorities, strategy, goals, vision, mission, opportunities, projections, intentions or expectations.

Factors, among others, that could cause actual results and events to differ materially from those expressed or implied in any forward-looking statement include risks and uncertainties relating to: California wildfires, including the risks that we may be found liable for damages regardless of fault and that we may not be able to recover all or a substantial portion of costs from insurance, the wildfire fund established by California Assembly Bill 1054, in rates from customers or a combination thereof; decisions, investigations, regulations, issuances or revocations of permits and other authorizations, renewals of franchises, and other actions by (i) the California Public Utilities Commission (CPUC), Comisión Reguladora de Energía, U.S. Department of Energy, U.S. Federal Energy Regulatory Commission, Public Utility Commission of Texas, and other regulatory and governmental bodies and (ii) the U.S., Mexico and states, counties, cities and other jurisdictions therein and in other countries in which we do business; the success of business development efforts, construction projects and acquisitions and divestitures, including risks in (i) being able to make a final investment decision, (ii) completing construction projects or other transactions on schedule and budget, (iii) realizing anticipated benefits from any of these efforts if completed, and (iv) obtaining the consent or approval of partners or other third parties, including governmental and regulatory bodies; civil and criminal litigation, regulatory inquiries, investigations, arbitrations, property disputes and other proceedings, including those related to the natural gas leak at Southern California Gas Company’s (SoCalGas) Aliso Canyon natural gas storage facility; changes to laws and regulations, including certain of Mexico’s laws and rules that impact energy supplier permitting, energy contract rates, the electricity industry generally and the import, export, transport and storage of hydrocarbons; cybersecurity threats, including by state and state-sponsored actors, to the energy grid, storage and pipeline infrastructure, information and systems used to operate our businesses, and confidentiality of our proprietary information and personal information of our customers and employees, including ransomware attacks on our systems and the systems of third-parties with which we conduct business, all of which have become more pronounced due to recent geopolitical events and other uncertainties, such as the war in Ukraine; failure of foreign governments, state-owned entities and our counterparties to honor their contracts and commitments; actions by credit rating agencies to downgrade our credit ratings or to place those ratings on negative outlook and our ability to borrow on favorable terms and meet our debt service obligations; the impact of energy and climate policies, laws, rules and disclosures, as well as related goals and actions of companies in our industry, including actions to reduce or eliminate reliance on natural gas generally and any deterioration of or increased uncertainty in the political or regulatory environment for California natural gas distribution companies and the risk of nonrecovery for stranded assets; the pace of the development and adoption of new technologies in the energy sector, including those designed to support governmental and private party energy and climate goals, and our ability to timely and economically incorporate them into our businesses; weather, natural disasters, pandemics, accidents, equipment failures, explosions, acts of terrorism, information system outages or other events that disrupt our operations, damage our facilities and systems, cause the release of harmful materials, cause fires or subject us to liability for damages, fines and penalties, some of which may be disputed or not covered by insurers, may not be recoverable through regulatory mechanisms or may impact our ability to obtain satisfactory levels of affordable insurance; inflationary and interest rate pressures, volatility in foreign currency exchange rates and commodity prices, our ability to effectively hedge these risks, and their impact, as applicable, on San Diego Gas & Electric Company’s (SDG&E) and SoCalGas’ cost of capital and the affordability of customer rates; the availability of electric power, natural gas and natural gas storage capacity, including disruptions caused by failures in the transmission grid or limitations on the withdrawal of natural gas from storage facilities; the impact of the COVID-19 pandemic on capital projects, regulatory approvals and the execution of our operations; the impact at SDG&E on competitive customer rates and reliability due to growth in distributed and local power generation, including from departing retail load resulting from customers transferring to Community Choice Aggregation and Direct Access, and the risk of nonrecovery for stranded assets and contractual obligations; Oncor Electric Delivery Company LLC’s (Oncor) ability to eliminate or reduce its quarterly dividends due to regulatory and governance requirements and commitments, including by actions of Oncor’s independent directors or a minority member director; changes in tax and trade policies, laws and regulations, including tariffs, revisions to international trade agreements and sanctions, such as those that have been imposed and that may be imposed in the future in connection with the war in Ukraine, which may increase our costs, reduce our competitiveness, impact our ability to do business with certain counterparties, or impair our ability to resolve trade disputes; and other uncertainties, some of which are difficult to predict and beyond our control.

These risks and uncertainties are further discussed in the reports that Sempra has filed with the U.S. Securities and Exchange Commission (SEC). These reports are available through the EDGAR system free-of-charge on the SEC's website, sec.gov, and on Sempra’s website, sempra.com. Investors should not rely unduly on any forward-looking statements.