Transmission and distribution (T&D) infrastructure serves a critical role transporting electricity from power plants to residential and commercial customers. Without T&D lines, power cannot be delivered, including from wind and solar plants often located hundreds or thousands of miles from urban centers with high electricity demand.

As the owner of one of the largest energy networks in North America, Sempra’s critical investments, primarily focused on T&D infrastructure, are helping to accelerate the energy transition. Today, more than 36 million consumers rely on Sempra and its family of companies to deliver resilient, reliable, and affordable energy every day.

Transmission and Distribution in California and Texas 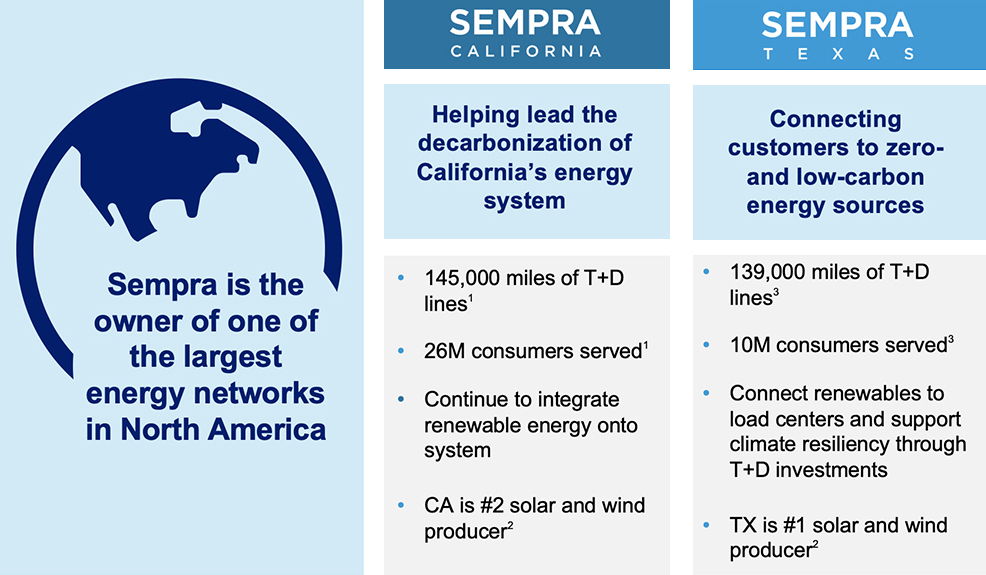 SoCalGas is utilizing existing infrastructure to support the transmission and distribution of renewable natural gas and to study the application of hydrogen energy. Recently, SoCalGas announced that it will be testing a new technology that can simultaneously separate and compress hydrogen from a blend of hydrogen and natural gas. SoCalGas also recently announced a program to study blending hydrogen into its natural gas pipelines. If approved by regulators, the program would be the first step toward establishing a statewide standard for injecting hydrogen into the natural gas grid.

Our Energy Behind Texas

In Texas, Oncor Electric Delivery Company LLC (Oncor), another Sempra utility, is the largest transmission and distribution electric utility in the state. Oncor owns and operates 139,000 miles of T&D lines, helping connect Texans to the growing supply of renewable energy and helping to make the Lone Star State a leader in solar and wind production. Today, Oncor connects more than 60 renewable generators to the Electric Reliability Council of Texas (ERCOT) grid, capable of generating more than 11,000 MW of electricity. Of this, approximately 10,000 MW is from wind interconnections, representing more than 42% of all ERCOT wind generation.

Investing in the Future

1. Amounts are approximate and includes SDG&E and SoCalGas as of 12/31/2020. Distribution lines included in the T+D miles total include distribution and service pipelines.
2. 2019 Data. EIA Net Generation for All Sectors within the United States and for Mexico, BP’s 2020 Statistical Review of World Energy. Includes U.S. and Mexico only.
3. Amounts are approximate and includes 100% of Oncor and Sharyland as of 12/31/2020.