LOS ANGELES, Oct. 29, 2020 /PRNewswire/ -- Southern California Gas Co. (SoCalGas) today announced it is for the first time dispensing California-produced renewable natural gas (RNG) at many of the natural gas fueling stations it operates across the state. The utility recently began purchasing RNG from Pixley-based Calgren Dairy Fuels (Calgren), which captures the greenhouse gas-producing manure from dairy farms and turns it into RNG, a renewable fuel. SoCalGas has dispensed 100% RNG from out-of-state sources at its fueling stations for a year. Calgren's facility is part of a rapidly growing biomethane industry in California and is currently the largest dairy biogas operation in the U.S. 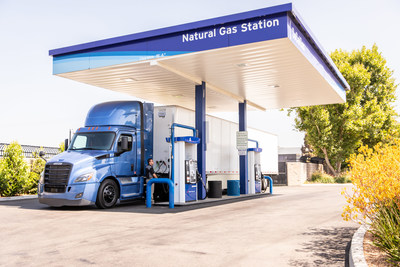 "With the right incentives in place, RNG has significant opportunity to help the state move toward carbon-neutrality in not only the transportation sector but in many areas where traditional natural gas is now used."

"RNG is an important tool in reducing greenhouse gas emissions, which cause climate change, and we're looking forward to major growth in production of this renewable fuel in California," said Jawaad Malik, SoCalGas vice president of gas acquisition.  "With the right incentives in place, RNG has significant opportunity to help the state move toward carbon-neutrality in not only the transportation sector but in many areas where traditional natural gas is now used."

"Calgren is excited to be one of the leading production facilities in the U.S., which will eventually capture the waste of more than 132,000 cows from at least 18 dairies," said Lyle Schlyer, president of Calgren.  "Using the methane captured from dairy waste for transportation fuel is good for the environment because it not only keeps methane from escaping to the air, it allows us to replace traditional natural gas with a renewable version, and it reduces pollution from diesel truck engines."

RNG is produced when methane, a greenhouse gas that occurs naturally when organic waste breaks down, is captured and upgraded to pipeline standards rather than being released into the air. Organic waste sources such as dairy farms, landfills, sewage, food waste, and dead forest trees create about 80% of all methane emissions in California. Capturing this methane and converting it to RNG rapidly reduces greenhouse gas emissions. In California, a 2016 law requires a 40% reduction of methane emissions from waste sources, with provisions to deliver that energy to customers.

Production of the fuel has accelerated quickly in California, supported by state incentive programs seeking to reduce greenhouse gas emissions from trucking and dairy farms.  In just the next three and a half years, at least 160 RNG production facilities will be online in California to serve the transportation fuel sector, producing more than 15.8 million therms of carbon-negative RNG every year and replacing about 119 million gallons of diesel fuel.  That's enough to reduce greenhouse gas emissions by over 3.4 million tons every year, the equivalent of taking more than 730,000 cars off the road.

In addition, California recently enacted legislation that expands the definition of renewable natural gas to include organic waste such as dead trees, agricultural waste and vegetation removed for wildfire mitigation which is typically converted to RNG by non-combustion thermal conversion.  The new legislation has a twin benefit of helping to manage wildfires with reduced debris and also lowering greenhouse gas emissions.

To help expand the growth and use of RNG, SoCalGas has proposed a service that would give its customers the option to purchase a portion of their natural gas from renewable sources, just as millions of people can opt to purchase renewable electricity today.  The California Public Utilities Commission (CPUC) has issued a draft ruling authorizing such a service, which is expected to be voted on by the end of the year.

Investment in RNG is also growing beyond California.  Oregon recently enacted legislation allowing its natural gas utilities to purchase RNG on behalf of its customers, with the goal of replacing 15% of traditional natural gas with RNG by 2030.  Virginia-based Dominion Energy has committed to investing in enough RNG projects to make its gas infrastructure net-zero carbon by 2040.  In 20 years, enough RNG could be available in the U.S. to replace about 90% of the nation's current residential natural gas consumption, according to a recent study by ICF.

About SoCalGas
Headquartered in Los Angeles, SoCalGas® is the largest gas distribution utility in the United States. SoCalGas delivers affordable, reliable, clean and increasingly renewable gas service to 21.8 million customers across 24,000 square miles of Central and Southern California, where more than 90 percent of residents use natural gas for heating, hot water, cooking, drying clothes or other uses. Gas delivered through the company's pipelines also plays a key role in providing electricity to Californians— about 45 percent of electric power generated in the state comes from gas-fired power plants.

SoCalGas' vision is to be the cleanest gas utility in North America, delivering affordable and increasingly renewable energy to its customers. In support of that vision, SoCalGas is committed to replacing 20 percent of its traditional natural gas supply with renewable gas by 2030. Renewable natural gas is made from waste created by dairy farms, landfills and wastewater treatment plants. SoCalGas is also committed to investing in its gas delivery infrastructure while keeping bills affordable for our customers. From 2014 through 2018, the company invested nearly $6.5 billion to upgrade and modernize its pipeline system to enhance safety and reliability. SoCalGas is a subsidiary of Sempra Energy (NYSE: SRE), an energy services holding company based in San Diego. For more information visit socalgas.com/newsroom or connect with SoCalGas on Twitter (@SoCalGas), Instagram (@SoCalGas) and Facebook.