Company's significant gain over 2020 ranking reflects progress within the company

SAN DIEGO, April 30, 2021 /PRNewswire/ -- Sempra Energy (NYSE: SRE) has been named to Forbes' "America's Best Employers for Diversity" list for 2021, marking the third consecutive year that the company has been recognized. Sempra Energy ranked 79th out of 500 companies this year, up from 328th last year, and was the second highest-ranking employer in the utility industry. 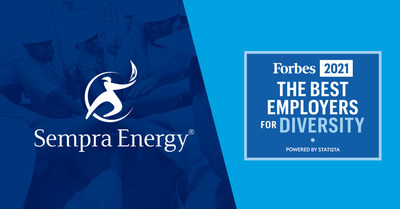 "At the Sempra family of companies, we are committed to building a high-performance culture that advances the interest of all of our stakeholders," said Karen Sedgwick, senior vice president and chief human resources officer for Sempra Energy. "Consistent with that commitment, we believe that advancing diversity and inclusion helps to shape an innovative workforce, where employees are encouraged and empowered to be their authentic selves. This is critical to elevating performance and allowing us to partner responsibly with our communities as we look to build North America's premier energy infrastructure company."

Promoting a High-Performance Culture Across the Company

Sempra Energy's focus on building a high-performance culture across its family of companies is underpinned by its long history of promoting safety, advancing workforce training and development, and fostering an inclusive environment where diverse perspectives and backgrounds are embraced. The Sempra Energy family of companies offer a variety of programs to enhance diversity and inclusivity in the workplace, including 16 employee councils, mentorship programs, trainings and an annual Diversity & Inclusion Summit. Understanding that a commitment to diversity and inclusion starts at the top, Sempra Energy is a founding member of the CEO Action for Diversity & Inclusion initiative and a member of the Paradigm for Parity coalition, which promotes gender parity in the workplace.

The company has held dozens of enterprise-wide and department-level conversations and engaged thousands of employees at all levels to actively participate in discussions on the impacts of racism. The feedback from these conversations provided a framework for Sempra Energy's Racial Equity Action Plan which has been integrated into leadership and company goals. The company also introduced a virtual summit series offering monthly webinars on a variety of topics aimed at advancing the company's overall performance, including topics such as increasing cultural competency, celebrating diversity, and sustaining personal connections that are critical for an inclusive and engaging workforce.

Sempra Energy serves the basic energy needs of more than 36 million consumers, and with that commitment to service comes opportunities to invest in and promote economic opportunity and well-being within the communities it serves. In 2020, Sempra Energy and the Sempra Energy Foundation launched a giving campaign focused on social justice across communities the company serves, raising more than $700,000 in employee donations and company matches. This campaign was part of a larger set of community investments totaling over $17 million that directly benefitted people of color, immigrants, women- and minority-owned small businesses, the LGBTQ community and other underrepresented populations, including the company's commitment to a number of STEM programs that work with schools and nonprofits to advance the mentorship of young women who are seeking careers in science, technology, engineering and math.

Additionally, the Sempra Energy family of companies has programs dedicated to advancing supplier opportunities for businesses owned by women, minorities, service-disabled veterans, and members of the LGBTQ community. In 2020, both of the company's California utilities, San Diego Gas & Electric and Southern California Gas Co., purchased a total of more than $1.7 billion in goods and services from diverse suppliers, marking the eight consecutive year that each company's supplier diversity spending exceeded 40%, surpassing the California Public Utilities Commission's goal of 21.5%. In Texas, Oncor's supplier diversity accounted for nearly $335 million or 12% of its procurement spend, and the company issued $450 million in sustainable bonds with proceeds designated for investments in or expenditures with women- and minority-owned business suppliers.

Forbes' ranking was determined from an independent survey of 50,000 employees working for major companies in the U.S. Respondents were asked about their employers' diversity practices related to age, gender equality, ethnicity, disability, sexual orientation equality and general diversity. The ranking also considered diversity among board and executive teams, as well as the most proactive diversity and inclusion initiatives.

Sempra Energy's mission is to be North America's premier energy infrastructure company. The Sempra Energy family of companies have more than 19,000 talented employees who deliver energy with purpose to over 36 million consumers. With more than $66 billion in total assets at the end of 2020, the San Diego-based company is the owner of one of the largest energy networks in North America serving some of the world's leading economies. The company is helping to advance the global energy transition by enabling the delivery of lower-carbon energy solutions in each market it serves, including California, Texas, Mexico and the LNG export market. Sempra Energy is consistently recognized as a leader in sustainable business practices and for its long-standing commitment to building a high-performing culture including safety, workforce development and training, and diversity and inclusion. Sempra Energy is the only North American utility sector company included on the Dow Jones Sustainability World Index and was also named one of the "World's Most Admired Companies" for 2021 by Fortune Magazine. For additional information about Sempra Energy, please visit Sempra Energy's website at sempra.com and on Twitter @SempraEnergy.