LOS ANGELES, Oct. 11, 2017 /PRNewswire/ -- Southern California Gas Co. (SoCalGas) today announced the successful installation of a novel bioreactor system that will be used to test power-to-gas technology at the U.S. Department of Energy's National Renewable Energy Laboratory (NREL) in Golden, Colorado. Power-to-gas technology is a cutting-edge method of storing excess renewable energy. The project is the first of its kind in the United States converting hydrogen generated from excess renewable power into pipeline quality methane for use in homes, businesses and in transportation. A photo of the reactor is available here.

"Power-to-gas technology can significantly increase the overall amount of renewable energy we use, by providing an economical method of storing excess solar-and wind-generated electricity," said Jeff Reed, director of business strategy and advanced technology at SoCalGas. "And this technology takes advantage of existing infrastructure, and can hold excess renewables for days, weeks or months to shift solar from day to night, address weather patterns and even seasonal patterns."

"Archaea are uniquely capable of handling fluctuating levels of hydrogen produced by electrolyzers as wind and solar generation systems cycle up and down," said Kevin Harrison, senior engineer for NREL. "That's in part why we believe this technology could provide a superior large-scale, cost-effective solution for storing excess renewable energy using our nation's natural gas distribution system."

According to a 2017 Lawrence Berkley National Lab study, by 2025, between 3,300 and 7,800 gigawatt-hours of excess solar and wind energy will be curtailed in California. If all that excess solar and wind energy were converted to methane through the biomethanation process and stored as renewable natural gas, it would provide enough renewable energy to heat 158,000 to 370,000 homes or provide renewable electricity to 80,000 to 187,000 homes.

The pilot project will be used to help assess the commercial viability of this power-to-gas approach to energy storage and provide insights into potential megawatt-scale system designs. The team will combine these insights with renewable energy resource data to identify optimal locations in California and the western half of the U.S. where this grid-scale energy storage would be the most beneficial and cost-effective.

Power-to-gas technology uses renewable electricity when prices are low—including times when renewable supply exceeds demand and would otherwise be wasted—to power an electrolyzer, which splits water to produce hydrogen. The hydrogen is then combined with carbon dioxide and fed to a biomethanation reactor where it is converted into renewable natural gas, or RNG, by special micro-organisms. RNG can be used in any application currently served by natural gas, from home appliances to industrial processes, heavy duty vehicle engines and power plants.

The research will also test how effectively the microbes convert hydrogen to methane and how efficiently the storable methane can be converted back to electricity. Tests will also examine the potential of power-to-gas technology to store large quantities of renewable energy for up to an entire year and how it compares in performance and cost to battery storage. Initial reports are expected beginning in 2018. The study will continue for several years.

About SoCalGas
Headquartered in Los Angeles, SoCalGas® is the largest natural gas distribution utility in the United States, providing clean, safe, affordable and reliable natural gas service to 21.7 million customers in Central and Southern California. Its service territory spans 22,000 square miles from Fresno to the Mexican border, reaching more than 550 communities through 5.9 million meters and 101,000 miles of pipeline. More than 90 percent of Southern California single-family home residents use natural gas for home heat and hot water. In addition, natural gas plays a key role in providing electricity to Californians—about 60 percent of electric power generated in the state comes from gas-fired power plants.

SoCalGas has served communities in California for 150 years and is committed to being a leader in the region's clean energy future. The company has committed to spending $6 billion over the next five years to modernize and upgrade its gas infrastructure, while also reducing methane emissions. SoCalGas is working to accelerate the use of renewable natural gas, a carbon-neutral or carbon-negative fuel created by capturing and conditioning greenhouse gas emissions from farms, landfills and wastewater treatment plants. The company is a subsidiary of Sempra Energy (NYSE: SRE), a Fortune 500 energy services holding company based in San Diego. For more information visit socalgas.com/newsroom or connect with SoCalGas on Twitter (@SoCalGas), Instagram (@SoCalGas) and Facebook. 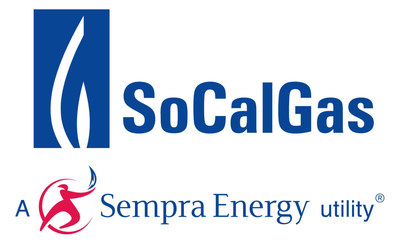