Sempra’s family of companies’ commitment to climate resilience, as well as its focus on safety, innovation and people, was lauded throughout the tour. Advisor McCarthy noted that with a 40-year tenure of government service she has seen many such facilities, but SDG&E’s is among the best she’s visited. “I’m extremely excited about what I’ve seen,” she said.

She also recognized that the company’s innovative approaches to advance climate resilience show courage, leadership, innovation, and creativity exemplifying the types of investments the administration seeks to advance. “These are all adaptations to our climate crisis that everyone should take a look at and start emulating,” Advisor McCarthy said. 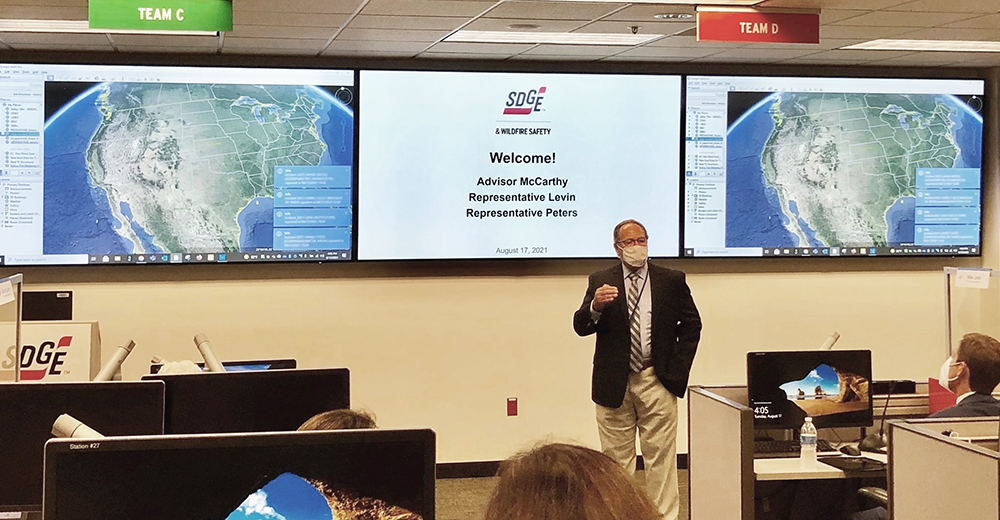 SDG&E, a Sempra operating company, has a long commitment to strengthening the region against a dynamic climate that has amplified high fire-threat conditions in recent years. SDG&E’s recent wildfire mitigation innovations for 2021 include the following, among other measures:

Each of Sempra’s operating companies is advancing the energy transition through energy infrastructure that enables the delivery of lower-carbon energy sources with an increasing focus on climate resilience.

Representative Peters, a member of the U.S. House Energy and Commerce Committee, praised SDG&E for being a progressive utility, including the fact that it is delivering about 40% of its power from renewable sources.

SDG&E is also furthering the energy transition through its electric vehicle (EV) infrastructure. There are approximately 60,000 EVs and 7,500 EV charging stations in SDG&E’s territory.

Advisor McCarthy noted that natural gas is expected to continue playing a role in the energy transition alongside renewable energy. Sempra’s natural gas infrastructure supports renewables by providing the flexibility for intermittent wind and solar resources to be seamlessly added to the grid without service interruptions to customers. Southern California Gas Co., another Sempra operating company, is working to utilize its existing infrastructure to advance hydrogen technology and has a goal of replacing 20% of the traditional natural gas delivered to its core customers with renewable natural gas by 2030.

On a global scale, through the Cameron LNG export facility, Sempra is playing a critical role in transitioning growing economies to reliable suppliers of natural gas in place of higher-carbon fuel sources, such as biomass, fuel oil and coal.

From innovations at Sempra’s California utilities to LNG infrastructure on the Gulf Coast, Sempra is committed to innovating and building critical energy infrastructure that is designed to be climate resilient and will support the needs of customers. Its operating companies are demonstrating that Sempra is making the critical infrastructure investments today in an effort to support the net-zero energy systems of tomorrow, and the work is bolstered by collaboration with government partners who share the same commitment.